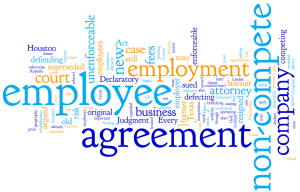 Every business needs to protect itself from the risk posed by employees defecting to work for the competition. But what happens if you sue a former employee under a non-compete agreement that is too broad or otherwise unenforceable? They may be able to recover their attorney fees for defending the lawsuit. In the recent case of Urelift Gulf Coast, LP v. Bennett a Harris County district court allowed an employee to do just that. In that case, a concrete foundation rehabilitation company sued a former employee after he resigned and began operating a competing business in Houston. The employee had already left the company at one point during his employment but was rehired under a new employment agreement. The new agreement did not have a non-compete provision and contained a clause stating it superseded any prior employment agreements. When the employee quit again and went on to start a competing business, the company sued him for breaching his old non-compete agreement. The employee counter-sued the company under the Texas Declaratory Judgment Act, asking the court to declare his old non-compete agreement void.

This case is an important lesson for employers in Texas. A non-compete agreement must be reasonably limited in scope, duration, and geography or else it may be unenforceable. Every employer should recognize that if they go after defecting employees under a non-compete that is overbroad, they face some risk of being liable for the employee’s attorney fees for defending the lawsuit.

« Trade Secret?
On Second Thought – Maybe You Can Stop Me »