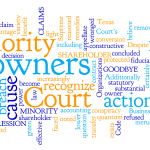 In Ritchie v. Rupe, the Texas Supreme Court faced the question of whether to recognize a common law cause of action for “minority shareholder oppression.”  Despite a substantial history of trial courts and lower appellate courts having concluded that this cause of action exists, the Court refused to recognize the cause of action.  The Court reasoned that minority owners are already protected and have the benefit of statutory remedies, such as those found in the Business Organizations Code.  Additionally, the Court noted that minority owners who believe they have been wronged by a majority owner can assert a variety of claims, including those for (1) an accounting, (2) breach of fiduciary duty, (3) breach of contract, (4) fraud and constructive fraud, (5) fraudulent transfer, (6) conversion, (7) conspiracy, and (9) quantum meruit.  While the Court’s decision is not a green light for majority owners to take advantage of minority owners, it certainly removes from the equation what had become an increasingly popular and effective claim against majority owners who abused their power.

See I Want to Sell – And You Can’t Stop Me